I have a social media addiction

summary: I reflect on my social media addiction, how we got to this point, and what to do about it.

How did we get here?

The trouble started at age 13 when I decided to get a Tumblr account, my first social media aside from Pinterest. I was a pretty sad child with not a lot of friends and also weird interests so it made sense. My parents were always wary of social media and had pretty closely monitored my internet use up until this point (I'm very grateful for this) But due to that, I got an account without telling them. This, along with creating an Instagram account soon after was pretty much my one act of rebellion throughout my entire childhood.

I have always been a serial lurker, thanks to being terrified of talking to people that I don't know, online or off. But even lurking and never talking to anyone can kind of mess with your brain. I would scroll for hours into specific blogs and just stew in certain people's outrage. I don't know what it was but there was something addictive about it. Even back then, I knew I had unhealthy habits related to internet use (not just mentally. I completely ruined my posture from being slumped in front of my laptop all day) but I didn't want to stop because real life was just not enjoyable in any way, so the internet was the alternative. 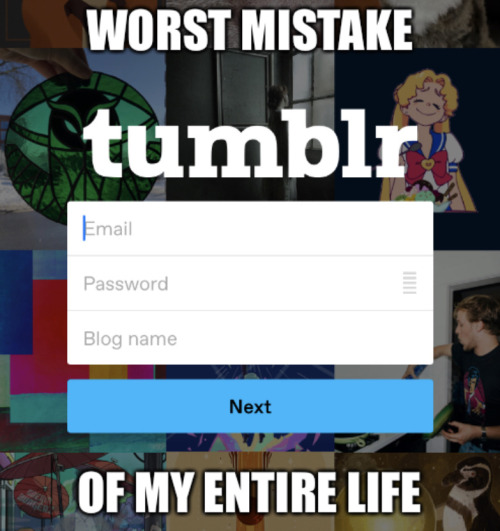 this meme, but like. unironically.
(I would credit the source but they're deactivated)

Carrying on from this, I actually started to post "content" around 2017. Most 14 year olds are just kind of unfunny naturally and this included me, but a broken clock is right twice a day I guess. So some of the stuff I would post started to pick up steam. Anyway, the pure happy chemical hit I got when stuff I'd made got notes and responses was unlike anything I felt before, so I knew I had to keep making stuff, especially since I was completely miserable irl. So, because of this, I spent a lot of time looking at my school mandated iPad and obsessing over what I was going to make next. I definitely annoyed a lot of people due to this and that's how it became a vicious cycle. I couldn't talk to anyone outside of the internet about the things I was doing, so I had to use the internet more.

My bad relationship to posting stuff online continued when I made an art Instagram account in December 2018. I felt like the art I made was impossible to show to people or talk about, but I wanted to share it more than anything, so once again I had to turn to the internet for help. Many words have been written about how Instagram is terrible for artists and I agree, but at first, it was actually fine. It really did feel like having an art account was a good move. Often when I felt demotivated, I could simply look at my feed and find inspiration. I still feel very inspired by the things my peers post and people online have been nothing but kind about my art. But of course, comparison always creeps up on you and Instagram amplifies this. I ended up changing how I made art for the worse, because I thought that was what I needed to do to grow my account.

For example, everything I made had to be good and not too weird or personal, and crop correctly, and not be difficult to scan in. And I felt like I had to post stuff or the content recommendation algorithm would leave me behind, even if I didn't actually like the outcome. So ultimately, it felt like my art was getting worse, and it was my own need for validation and likes that was the problem. Actually though, I wasn't actually getting any noticeable increase in engagement despite these changes. This demotivated me a lot and made me not want to post, but simultaneously I would feel guilty about it because I was right, the recommendation algorithm was leaving me behind. In the end I felt paralysed and didn't want to make anything at all. Plus, due to changes in the format of the feed, the app just became frustrating to even open. Soon, I had a lightbulb moment where I realised Instagram was no longer actually fulfilling me in any way. But I still couldn't stop using it.

Simultaneously I still had Tumblr which surprisingly had gotten less painful to use overtime. But still, it was a huge time sink and I would stare at my dashboard for hours, waiting for people to post stuff. Ultimately I wasn't having fun and wasting entire days just scrolling on my phone and PC. This came to a head during the summer of 2021. I had to get a job and in addition, had to complete projects for school and then university. My addiction to looking at my phone and computer definitely got in the way of completing those things and I worried about it the entire summer. I worried so much (pretty much every second of the day) but I still couldn't stop. It was then that I realised that it wasn't just a minor problem but a full on addiction.

When I did realise I felt (and still feel) very guilty about it, since caring about social media at all is really vapid in my mind and having an addiction to it is like the lazy Times columnist Gen Z stereotype. This is why for a long time I could not admit to myself that I had a real genuine addiction, since it seemed too cartoonish to be the reality. However, as I said previously, even though I didn't call it an addiction for a long time, I felt guilty about my social media habits. Even after learning about the predatory tactics that tech companies use to keep users on their apps, it still feels like all my fault. Like, Why can't I get up? I'm literally gaining nothing from scrolling right now, why am I still doing it? Why can't I just read a book and feel fulfilled that way? Why am I so obsessed with my follower count??? This is loser behaviour!!! Just delete the app, it's no big deal. But it feels impossible. Because I need the things I make to be seen.

So, with all this, it's safe to say that I had A Problem. After I realised that something was wrong, I deleted instagram and tumblr off my phone… only to download them again like a week later. This should have also been a sign to me that something was wrong… again. But I told myself that I just needed to get a healthier relationship to social media, do my work and it would be ok. Sadly, it was not ok.

Flash forward to January 2022 and I was still as unhappy and unproductive as ever. But this time, with the knowledge that I had an addiction, and that I hadn't done anything to try and get better (or actually, that I had tried, only to give up almost immediately) One day, something finally clicked and I'd had enough. 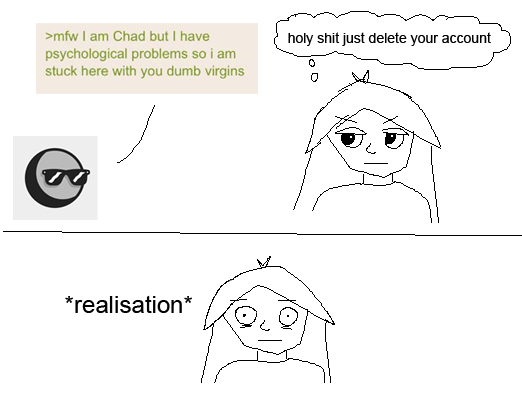 What made me realise was firstly, I had gotten back into the habit of hate-scrolling through people's tumblr blogs. Truly a sign that I wasn't really using the app for any sense of enjoyment. Secondly, the person who's blog I'd chosen that day seemed to hate tumblr and most of its user base, yet was still posting. I thought to myself “This is so stupid. Why not just leave the site permanently? You'd be so much happier” and then it hit me. This was the exact advice I needed to hear. And I was giving it (telepathically) to a stranger on the internet that I didn't even like.

It was clear: I should take my own advice. I would have to permanently leave the accounts causing me the most problems, or at least, take a very very long hiatus. And commit to it. So, I put a message on my close friends story telling my friends to not message me on instagram anymore. I thought most people would ignore this and try messaging me anyway (I was right), but it was a good way to hold myself accountable. I then downloaded my entire Tumblr blog, so I could search through all my drafts, then logged out. I have not logged back in.

I've checked instagram on desktop a couple of times and felt kinda bad every time, so that's something I need to get better at. However, it's been only a few weeks and I feel so much better. Not everything is perfect, I still look at my phone and PC for a similar amount of hours as before and I would prefer it if I didn't. But the time I spend feels way more productive, so that's something. I've also worked out that making stuff for the internet is fun, but it should never be your only hobby. I think I knew this for a long time. But there's a difference between knowing something and actually internalising something and taking action.

Something akin to a conclusion

So, uh. Why did I write this and why did I post this? As I said, having a social media addiction is embarrassing in my opinion. Why would I want to actually admit to that on the internet?

Firstly, I wrote it to hold myself accountable. If I ever feel like taking a sneaky look at Instagram on desktop, I can remember everything I wrote here and how important it is that I don't fall down a scroll-hole again. But that doesn't answer why I published this. I could have easily let it rot in my Google docs like most of my other writing.

Well, I've read a lot of people's personal accounts of using social media on Neocities and it's been very enlightening. The idea that it is possible to quit social media completely did not occur to me at all (lame as it sounds) until I heard people talking about it on here. I've also read a lot of reports from artists about making work and how Instagram can completely ruin that. Or how making art isn't really a skill in the first place, and you should do it for yourself, to feel happy. That made me feel very seen.

I knew I couldn't be the only one who struggled with a compulsive need to post things. And I know that if I'd stumbled upon a post like this and read it, I would have realised the problem much quicker. Basically: I'm hoping that publishing this might help someone realise that their habits are also unhealthy, but there is something you can do about it.

I think another step I need to take is to completely re-evaluate why I want to make art and post things in the first place, but that's a topic I would need a whole other post to unpack, so maybe another time. In the meantime, if you think you should delete Instagram, this is your sign to delete Instagram. Tumblr is… better. but she's on thin fucking ice.

Thanks to Xander for proof reading